A normal bike ride for me doesn’t usually start with riding away from the destination, or at 2:30 am for that matter! I guess I should’ve stopped trying to make comparisons there, this was going to be a ‘unique’ day.

Riding up to the Clifton suspension bridge to take a quick ‘start-line’ snap, I felt like a loaded mule, pockets packed with cereal bars and battery packs; clearly energy was going to be the key theme of the day. The lights of the bridge were turned off, providing a suitably anti-climactic starting photo. I opted to pull a face, deciding people would have to be satisfied with a snapchat location – I needed to get going.

Pedalling through the familiar Bristolian streets to the sound of DJ Boring mixtape combined with interjections of an angrily of-course Garmin, everything seemed serene. The locals throwing up at the side of the road, packed kebab shops and a few funny looks at the lycra clad guy carefully weaving down Park Street… By Bristol standards, a normal night.

I made for the Bristol-Bath bike path to the protests of the Garmin and things properly got underway. About an hour later, one up-close conversation with a friendly hedge courtesy of a brake failure and few low battery signals I arrived in Bath. Things weren’t going smoothly. Testing kit should always be done before the ‘expedition’ so to say, and as the Endo ride had been earmarked as a little test for the big trip (details to follow) all navigation had gone to pot. After a couple of loops around Bath and avoiding a scuffle that had broken out between a couple of homeless men, I proceeded up what the Garmin told me was Bathwick Hill. After a few encouraging shouts from a group of drunk freshers heading back to halls, I was up over the top and not looking forward to the next few 12%’rs that followed.

Riding through the night is a strange experience, I find it’s easy to get into ‘the zone’ where all thought of actually cycling is lost and you drift along roads in a semi-vegetative state. Until the next navigational mishaps alerts you to the real world… The real world was actually quite cold, minus 3 isn’t my normal riding temperature and it was sucking the life out of me in a dementor-like manner. For the next three hours I plodded on through small Hamlets and spooky forests until a glimmer of sun signalled the end of the cold darkness and the start of the day . Clocking up 60 miles by the time of the first pit-stop in East Grafton, (genuinely the smallest village I could’ve picked) I was happy to taste some warm soup delivered by my loyal crew member Kieran. We laughed at how ridiculous this all was as he got back to watching Harry Potter and I mounted the noble steed for stage 2. I could at least see where I was going now and the landscape was absolutely stunning; I tried to enjoy the moment and take it in but the biting cold had robbed me of my soul so I gladly returned to the vegetative state. No emotion, keep pedalling, go on Ped.

Forging a trail through the crisp frost that caked the road, the temperature rose to sweltering 0 degrees where it settled for the remainder of the next 20 or so miles. I was now clocking on through the Newbury morning traffic, drawing ever closer home. Kieran lay in wait with an another soul warming soup and had got me a shout out on radio 1 – top crew member award right there! I was starting to get close to my training roads and some familiar road signs gave me a necessary boost approaching the 100 mile mark. Feeling a bit worse for wear compared to the handful of centuries I’d ridden in the previous weeks, having a group of friendly faces cheering me on ascending the last climb before lunch was a nice touch. 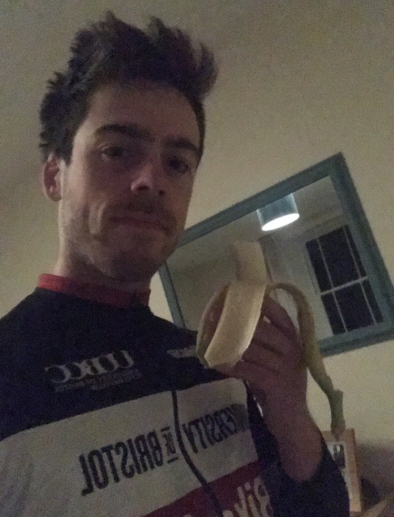 Choosing morale over pure energy, a full english was waiting for me and provided a welcome rest bite from the cold. The first 110 had been slower than anticipated and yearning to make the most what daylight there was available I prised myself from the table and hit the road. The largest climbing section so far warmed tired legs, a nice 15% road confirmed I was feeling worse for wear and after nailing what must’ve been some of Stravas slowest segment times, a descent was in sight. Losing all altitude in matter of minutes brought about the end of the chiltern hills and down on the flats I could set my bearing to Milton Keynes. A lack of gradient and gentle tailwind pushed me eastbound at my ever slow pace, but miles are miles, and they were starting to go by.

The sound of Richie Hawtins unrelenting techno was now providing a rhythm broken only by the return of those inclined friends. A nice little tickler up to Great Brickhill signalled the 150 mark, and time to take a quick breather in the pub! Briefly interrupting a wedding party for a water and glucose refill, I was promptly back on the bike, heading into dusk. Each mile now was one more than my longest previous ride (150) and the slightly easier terrain allowed the legs to recover slightly, with the average speed of the days riding now creeping back over 15 mph.

Pub pitstop at the 150 mark. Any guesses to which two faces have been up since 1:30?

Soon the serene Hertfordshire hills were replaced with the harsher contours of Bedford, as the darkness now engulfed the city. Rolling on through, a smooth surface indicated my entrance to Cambridgeshire, the final county of the ride. With a new energy found in the legs I sped past the final checkpoint without stopping. 190 miles on the clock was enough motivation for now.

Music turned up, a couple of glucose tablets on the move, time to dig in. A short steep hills got me up out of the saddle but the legs were surprisingly strong and miles really were ticking by now. Adrenaline kept the tired legs pushing me along at well over 20 mph as the double century approached. 198, 199, ‘excuse me sir can you please stop here?’ Road closed, you’re kidding me! A house fire had drawn 10 fire engines to the scene and I was forced around a smokey cul-de-sac before getting back on my way. Not how I envisioned the final mile, but my thoughts go out to all those involved. Eyes now intently fixed on the Garmin, the beautiful display signalled 200 miles ridden, get in there! Only, I still wasn’t in Cambridge… Legs pumping away hard now, the next five miles passed mercilessly without event. The familiar curves of Cambridge now passing below my wheels brought a sigh of relief. Kings college – the finish ‘line’. Thank you very much.

I’d hit the last few miles reasonably hard and as such no one had made it to the college yet. As with the start, a anticlimactic end to the ride seemed only fitting. A pint of the cold stuff and a burger at the Eagle with the crew finished out what had been a long, but good ride. 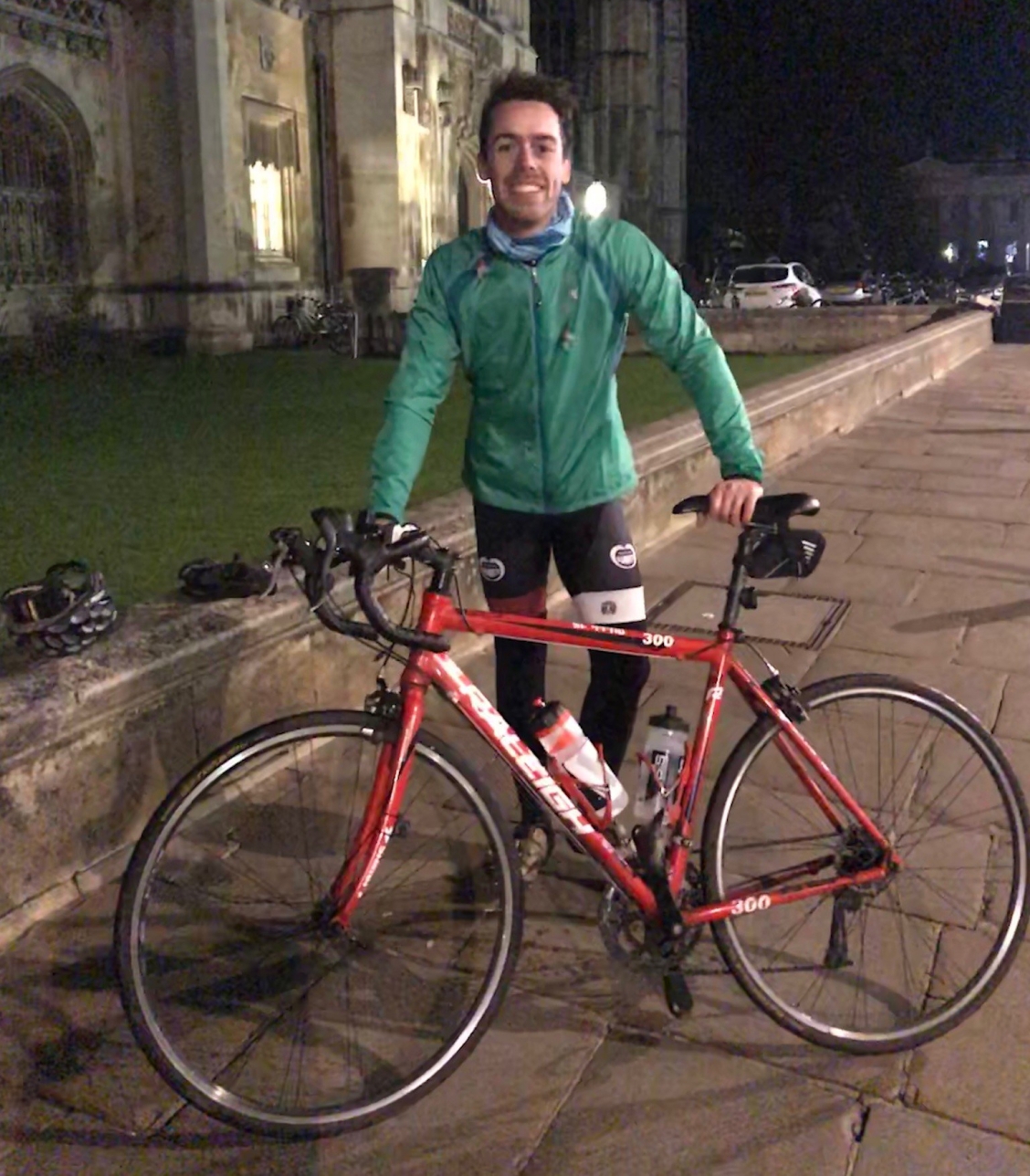 If anyone is actually interested in a few sub-par statistics from the ride:

Did it happen if you didn’t Strava it?

When all was said and done, the final total raised for Endometriosis UK including gift aid was an overwhelming £1460. Thank you so much to everyone who donated, this is a cause very close to my heart and has made this a really worthwhile ride. If I ever decide to break the 200 mark again, I’ll be sure to do it in the summer…