Prague to Berlin with the Boys – PT. 2

After refuelling in the nice town of Litomerice, the roads began to mercilessly point for the skies. The steep gradients were unrelenting in the 30+ degree heat and soon everyone began to feel all kinds of burn. Approximately half an hour of climbing led us to our first downhill, which seemingly robbed us of all our altitude before the road began inclining worse than before. It didn’t take long before the mountains sustained heavy barrage of verbal abuse that rang out helplessly around the valleys. It was over an hour of sustained climbing with no sign of the summit; morale was starting to take a battering.

We took conciliation from a man mowing his front lawn, who congratulated us on making it this far, before telling us the top was just around the corner. It bloody better be! Sure enough, he was a man of his word and we stocked up on some sour haribos at a petrol station before getting ready to enjoy this sweet decent. The chaingang was back on form, adopting the most aero positions possible with a laden bike we gleefully descended for the next twenty minutes. 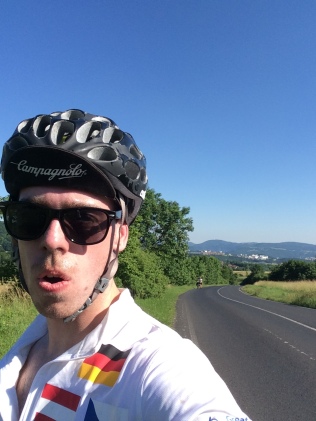 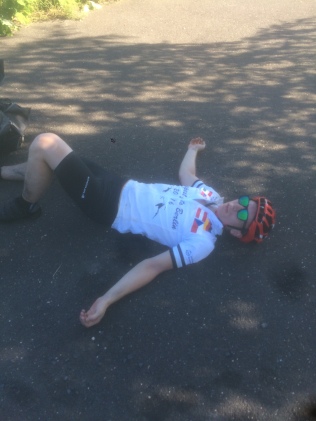 Man down, vowing to never complain of Welsh weather ever again…

Cruising down into Deutschland, all happy as Larry, we rejoined the trusty Elbe promising never to wittingly leave its side again. A quick drinks stop in Pirno was taken, with all hands eagerly recounting the epic descent, before we directed our wheels towards Dresden. The road from here I can only describe as stunning; a beautiful black ribbon that blissfully escorted us through the sun drenched countryside. As we neared the city we were joined by more and more cyclists tearing past us on full carbon setups. Looking on with envious eyes we made our way past massive country estates and into the city, where the streets outside our hostel were lined with happy locals drinking on the curb. After such an intense days riding, which totalled over 100 miles, we thought we’d earned at least one beer. One was all it took and we shortly hit the hay.

The Hostel was pretty unique, each room was themed and ours took the strange theme of a lounge/dining room. I’m struggling to explain this in my head but essentially there was a giant ‘sofa’ comprised of two single beds end-to-end and a huge table about 5 feet high with two single beds sunk in the top. To reach the ‘table’ beds you had to climb up an oversized chair; it was all a bit surreal after such a long day and it was one of those situations where you vow to just process it in the morning. 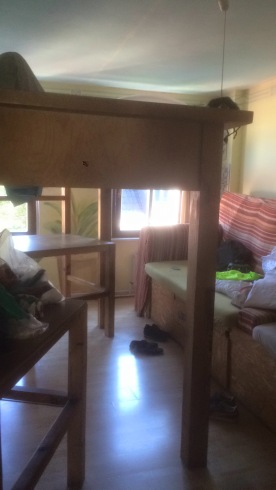 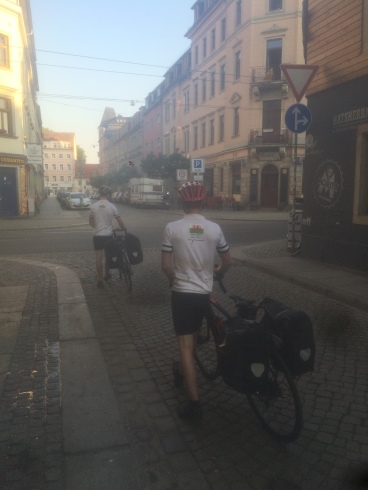 I will never forget this morning. I woke up from a deep sleep to find myself inside an oversized table, checked my phone briefly to find out the UK was leaving the EU. A weird morning. We spent the rest of the day soaking up what Dresden had to offer, including a swim in the river and plenty of cold bevies. Cracking day.

The following morning we got pedalling bright an early, eager to cover the full 130 miles to Berlin in one whack. Clearly a few beers had put a positive spin on those mountain memories, as the wheels began turning before 6 am. Again a stunning surface led us out the city and to our joy we found the day would be spent riding a flat road. Time to get those legs pumping boys! The sun was beating down on our sweaty backs, but riding in a V-formation we were steaming along (well, as much as you can be steaming along with panniers on a bike). As we entered the mid-afternoon, we’d clocked a hearty 100 miles, all feeling pretty happy with ourselves. Happiness soon turned to apprehension, as in our eagerness to take the most direct route to Berlin, the road expanded into a three-lane motorway with us cocooned in the hard shoulder. We were getting used to the sensible german drivers giving us a token blast of the horn, clearly having never seen such disregard for highway code. We took it on the chin and briskly took the next exit, retreating back to a safe cycle path. 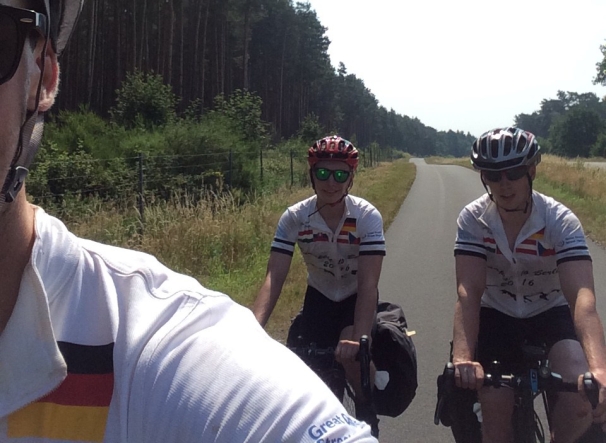 Rolling happily through the countryside, out of nowhere we got buzzed by a car coming within inches of Rhys’s bars honking his horn. In unison hands were raised and a couple of loose words were projected at the offending beamer. Instantly the car jumped on the brakes and all three of us clipped the back bumper in attempt to stop. The rage was emanating from under our helmets and it took a serious amount of self-restraint not to pursue this further. A few more heated words were exchanged but we cycled on, if not a bit disgruntled.

After this bizarre incident, the legs began to protest as we plodded onwards towards Berlin. The miles were definitely passing by and the boys became jubilant now the finish line was so close. A series of ‘yeah boy’ shouts entertained the locals as we rode the bike lanes into the city as fast as our legs would allow us, finally stopping at the Bradenburg gate. We’d made it. 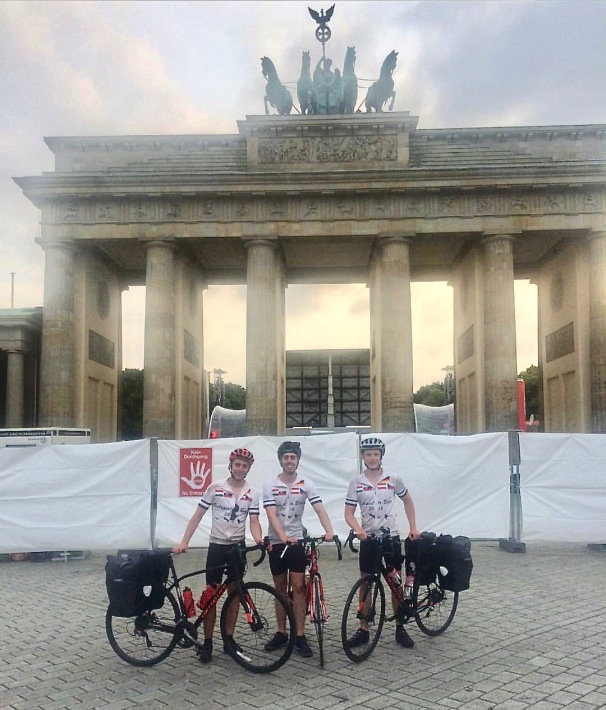 The boys at the Brandenburg gate.

Covering 230 miles in two days of riding was good going and with that we proceeded to watch Wales win their game in the Euros followed by a dominant Germany victory (the game was broadcast on the screen behind us to a packed boulevard). The atmosphere was immense as we rounded off our great weekend. Cheers for having me along boys!