Today is my seventh day on the road, and well, what a week it’s been! I’m currently sipping on a chocolat chaud, the classic version according to the lady, and enjoying what the quaint city of Namur has to offer. In short, I’m feeling world away from cycling into that rain last Saturday.

After taking some obligatory setting off photos and waving goodbye to my parents on Maidenhead bridge, I pointed Tina towards London and began pedalling us into the not so quaint town of Slough. Framed with grey skies and driving rain, Slough was looking as welcoming as a flat tyre on a touring bike. Continuing onwards through puddles, I was pleasantly surprised at how fast Tina went on the smooth roads, making upwards of 15 mph on a 50 kg bike was something of a novelty. This novelty was not to last though, as the sound of a grating chain indicated my first mechanical of the trip. Pulling over onto the pavement in Southall it seemed that everything about this ordeal was a bit grim. After ten minutes of fumbling through panniers with sodden gloves and a healthy portion of bodging later, we were up and running again!

Is it even a bike trip if things just go your way?

The rest of the ride was very wet, a bit slow and not a lot of fun. Steering Tina into the familiar streets of Edgware road, I was glad to complete our first day relatively unscathed. With my sodden socks and gloves on the radiator, I was ready for a good night in London. 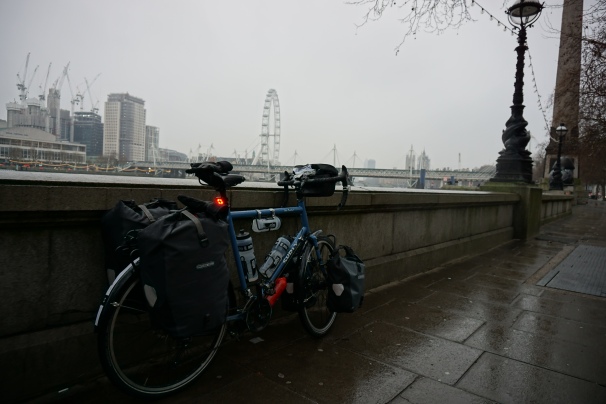 Feeling not so refreshed after a late but great night in London town, I set off again into the rain. Being a Sunday, the city was quiet and a real joy to cycle through. Oxford street and Chelsea soon gave way for Lewisham and Greenwich, and before long I had cleared the furthest reaches of the city. The relentless rain had turned to a wet sleet, mercilessly soaking through those freshly dried gloves and socks. Eating my Gingsters pasty under the cover of a village pavillion, I did start to question why I was doing this.

The weather did nothing in the way of fairing up and I was garnering my fair share of pitiful looks from passers-by at this point. As I reached Rochester the grating noise returned. Bollocks. Thankfully a bike shop was only half a mile away and they welcomed in a soaking cyclist with figuratively open arms. Ten minutes later we were back on the road again; problem sorted.

Due to a combination of snow and route riddled with hills, I was making painfully slow progress. With at least 15 miles to go as darkness arrived, I decided to abandon the scenic route for a more direct passage. Frantically pedalling alongside a dual carriageway, I received my first tailwind in the form of lorries pushing gusts of spray past me. At this point I needed everything I could get. Finally the signs for Canterbury began appearing and my trusty Garmin directed me straight to Andy’s house. My legs were in ruins but Andy rustled up the cure in the form of a roast dinner and a few beers to send me off. I couldn’t think of a better final meal in the UK.

First in line for the getaway to the rest of the world.

Monday morning swung round and I rode a bumpy 20 miles down to Dover where I was put right at the front of the queue for the ferry. Clearly I was a bit of a sight because a Polish lorry driver hopped out of his cab and began taking a load of pictures of me and Tina from various heights and angles. It had only been two days on the road, but here I was, first in line for the gateway to the rest of the world and I was excited. 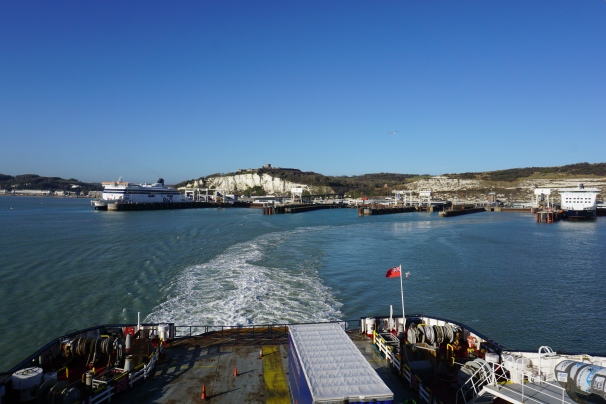 Rolling off the ferry I could barely believe the balmy conditions that greeted me. 10 degrees and a glimmer of sunshine between thick grey clouds. Cor, it was a beautiful sight. A smooth black ribbon of a bike path took me towards Dunkirk town centre, but soon I was out the other side and pedalling hard to reach my destination for the day. I’d arranged to stay with a Belgian family in Ypres that night. Their house was 40 miles from the ferry which had arrived at 3, meaning I really  had to put the hammer down to make up those miles. Good weather and great roads made the riding a lot of fun and as it began to get dark I plugged in some tunes to spur me on.

Tina was really moving now (well moving as fast as a 50 kg bike can be expected to move) and I soon caught up with an old man on the cycle path. He was deaf as a post and wouldn’t give way, so I reluctantly cycled behind him until I saw the cycle path turning away from the road at 90 degrees before doing a full U-turn and rejoining it again. This was my chance for an overtake! I pedalled hard and steered back onto the road, quickly Tina violently rocked once and then again. This time the back wheel didn’t follow the front and in half a second I had been bucked off my steed and found myself making friends with some gravel. The old man saw this all unfold and quickly came over to see if I was alright before dryly commenting “at least there is no train”and cycling off. Luckily the fall had mainly just damaged my pride as Tina had held up admirably. Within ten minutes I had reached the house of my first hosts, Johan and Ann. They welcomed me into their house with a large helping of spaghetti and a warm shower. To make things even better they called their daughter in Brussels who said she’d happily have me stay with her and her boyfriend in a couple of days. A truly great day. 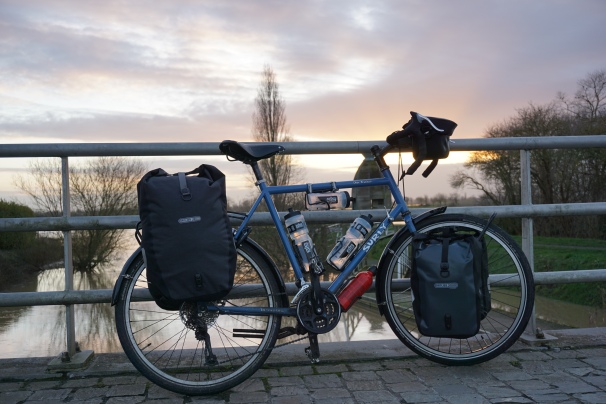 Chugging along into a Belgian sunset outside Popperinge.

Apparently I’d made a good impression with my new hosts, as after breakfast the next morning they were quite happy to leave me in the house going about my things whilst they were all at work. I did some leisurely sightseeing of Ypres before setting off for Lille that afternoon, where my next host had kindly offered to put me up. Charles is studying engineering in Lille and clearly had a way with wires. He told me how he built and rode  an electric bike from Lille all the way up to the North Cape (the most northerly point in Europe) in Norway. Feeling slightly unworthy having not welded my steed from the metal sheets, I drank a single Belgian beer and was out like a light.

Barge managing to stay straight in the 50 mph winds.

Knowing my newly found hosts in Brussels were only able to host me the following day, I cautiously eyed up the 75 mile ride from Lille. The 50 mph winds looked pretty terrifying but I really didn’t have much choice. Thankfully, for the most part they pushed me along my course and I began to enjoy this cycling thing again. That was until I found myself hauling the steed and I up a particularly large hill. This one just didn’t want to finish, it went round corners, had false summits and never seemed to end. Down in my lowest gear, legs spinning like hamster on its wheel, I was right at the lowest possible speed able to keep a bike upright. As I finally rose over the summit, I passed a finish line and started to see names of famous cyclists and a year painted next to them on the ground. Eddie Merckx, Fabien Cancellara, Peter Sagan, these were the big boys! (For those not familiar with these cyclists: Eddie Merckx is considered to be the best cyclist to have lived, Cancellara is an Olympic champion and Sagan a three-time world champion).

Where was I? After rounding a few more corners, brain still puzzled I started climbing again. And then I saw it. This hill kicked up to a solid 10% gradient and for the steepest kilometre the whole thing was covered in damp cobbles. Bloody hell, this thing bore a surface and steepness akin to the north face of the Eiger. If this was the Eiger, then riding Tina was equivalent to rock climbing in sandals. It was going to be slow and painful. Well I slaved away, reduced to a snails pace up this thing. But I am happy to say that this snail did eventually summit.

The rest of the ride into Brussels was smooth sailing and arriving in the city, my hosts turned out to be rather cool and worked on flemish radio. With an extra night booked in a hostel, I was able to do a bit of sightseeing and made friends with some other travellers. That night we went to a bar to watch some bands play, and after a couple of Belgian beers, my intentions of making it an early one soon disappeared. 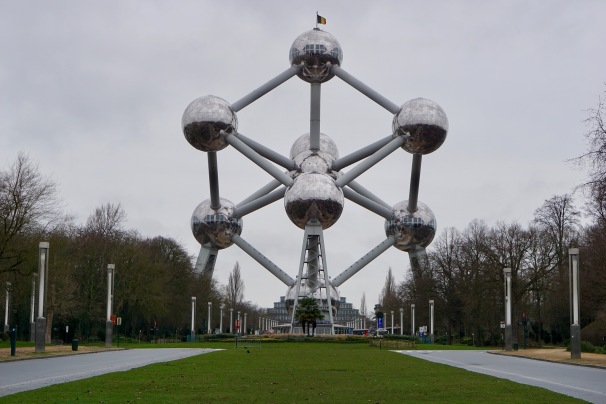 The Atomium in Brussels. For no one wondering the structure is an iron unit cell.

Riding naturally started a bit later the next morning but I had all day to plod out the 50 or so miles to my next hosts place. Romain was seriously into his cycling; equipped with an encyclopaedic knowledge alpine climbs, he also had the summit photos to back it up. He has currently completed 33 of Europes 50 toughest summits and is training to summit Mt. Ventoux six times in one day. Immediately I felt pretty out of my depth discussing my previous rides… But as soon as I mentioned me climbing the ‘Eiger’ his face lit up as he retrieved a book from a shelf. ‘Europes 50 most mythical climbs’. And there it was, my cobbled Eiger that caused me so much pain turned out to be one of a group of famous Belgian cobbled climbs that featured in the book. With my ego momentarily boosted, he then informed me that the next day would be much tougher than that ride through Flanders. Oh dear.

2 comments on “Bourne End through Belgium”