Why are you punishing yourself?

‘What did you do to deserve that?’ The comment from one of the hostel staff upon checking in, pretty accurately reflected the current and forecasted weather for bike riding. He seemed pretty adamant that this was some sort of punishment I was inflicting upon myself to make amends for previous wrongs in my life. I told him that I never speak of such wrongs; smirking as I loaded my panniers onto my bed for the weekend. This bed will be my sanctuary away from the cold and for the next few days as I explore Budapest.

This means I have survived my first week cycling in eastern Europe, moreover I am actually here on time. I’m never on time. 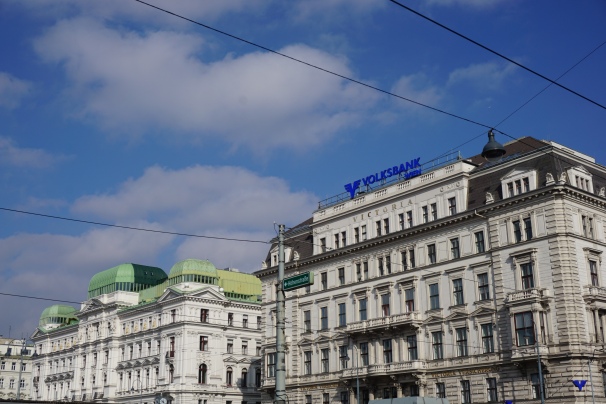 Vienna looking particularly beautiful in the sun as I left.

Meeting my parents in Vienna last weekend felt like pure luxury. Luxury that came in the form of not explaining why I am riding a bike in winter (this has become the go to question over the past few days, never mind Australia, why are you riding here in the cold?) and a warmer pair of gloves. It was bliss to sleep in, share my stories and stuff myself with food for two, preciously short days. Mercilessly these soon ended, I said goodbye and planned my route for the next week. No set schedule to stick to and colder weather forecast to set in, I reduced the daily distances to around 50 miles to somewhat ‘take it easy’. I would be very glad for this in days to come.

I had been warned that the cycle from Vienna to Bratislava was ‘the most boring ride of the whole Danube’. It feels like every stretch I now tackle is described by one person or another as ‘the most boring of their life’; filling me with a joyful expectation of what each day is to bring. Well to be on the safe side, the next morning I arrived to the viennese bank of the Danube armed with an arsenal of podcasts so witty even Kim Jong Un would crack a smile. The sounds of England cricketer Jimmy Anderson and Radio 1’s Greg James trying to come up with ‘cricketing vegetable’ puns was a particular highlight of mine. Chuckling my way out of the Austrian capital, I rode straight into a headwind which would stick with me for the day.

The Danube cycle path is probably Europes most popular bike path, and as such, it generally speaking is one of the best kept. Large car free cycle paths hug the river banks, with every slight change in direction signposted ten times over. You really don’t need to think. Until today, when the Austrians decide they shall dig up 30 km’s of path and start replacing it ready for summer, because no one would be foolish enough to want to ride in the winter, right? I weaved a patchwork route through adjacent villages, occasionally coming back to the path every 30 minutes to find that it was still being dug up. No matter, what’s an extra 10 miles on my way to Australia huh? At least I wasn’t bored. Kind of. A sign reading Slovenski followed immediately by a huge billboard of a scantily clad woman indicated my official crossing into eastern Europe. Judging by the bemused looks me and Tina were receiving from car models I didn’t even recognise, I got the impression this would be a very different section of my trip. 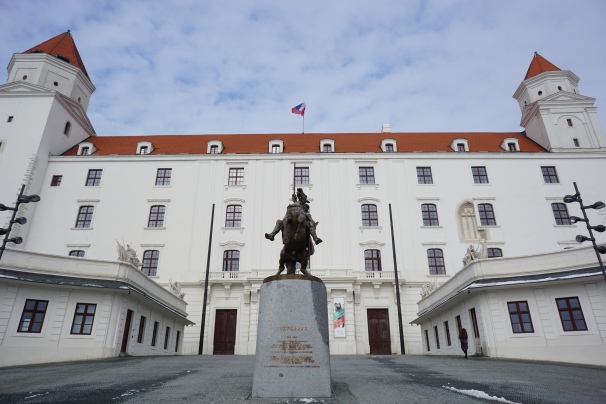 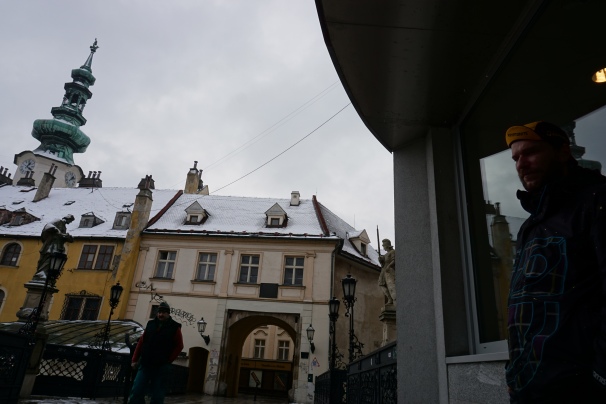 Snow days and sledging on my own in Bratislava.

Entering Bratislava on the cusp of darkness, I was under instructions to meet my host at a pub. Slightly interested in just how many looks of ‘what the heck is this chap doing wearing tight cycling clothes and carrying these weird shaped bags in our pub’ I was about to receive, I set off down a steep hill. Having diligently applied WD40 to my brakes that morning (don’t ask), I really couldn’t stop. Full brakes on with both feet down thankfully brought me to a slow stop in a Freddie Flintstone like manner. Deciding it was best to walk my bike down this beast of a hill, I made my way to its shallower banks, only to hear ‘where are you from?’ In English from a man in the shadows. I’d been rumbled, ‘how does he know I’m English?’ Double checking my helmet hadn’t mysteriously transformed into a Yorkshire pudding, or my glove a mug of english breakfast, before sheepishly replying ‘London’. Miraculously, out of every house in Bratislava I had walked by the house of my host Tomas, just as he was setting off to go to the pub to meet me. Excited at the prospect of not turning up to a pub wearing my lycra and carrying four panniers, I quickly chucked them in his place and set off for the watering hole.

Pints were €1.10. This was crazy. Over a few pints of the cold stuff Tomas explained how he runs the largest cycling NGO in Slovakia. These guys help shape the cycling side of the city and organise bike rallies and generally fun events. The whole thing is a volunteer project he does in his spare time with a tight knit group of pedal pushers and beer drinkers. Little did I know they would be showing me both sides of the group tonight.

I am coming to realise there are people in this world who are just ‘fun’ people. They know other fun people, are always searching for the next open bar, befriending random strangers and the thought of sleep just doesn’t cross their mind. I was expecting one, maybe two bars that night, oh how I didn’t understand eastern Europe yet. This is my rough run down of the evening: Start out at the Bernard pub, go to a two hour cycle meeting in Slovakian, I don’t understand a thing other than beers are to be drunk here, head to a different bar to meet other bikers, head to a club until it closes, befriend strangers and go to a lock in in an Italian restaurant, then move to a different lock in. Now ride bikes home in the snow. Then they work the next day because that was just a Monday night in Bratislava. Well I’ve got some learning to do.

There was so much snow that the next day I took a bus outside of Bratislava to go sledging up in the hills because no cycling was getting done for obvious reasons. Coming back from the snow to check on Tina, I found she had developed her first serious mechanical problem of the trip. Somehow, one the brakes had literally fallen to pieces. Moderately concerned I rushed to the nearest bike shop to be told it needed replacing, and after ringing around every bike shop in the city, it turned out no one had the part. Hearing about my trip, the guys and girls were really keen to help, deciding they would try mend my steed that night, I was to come back the next morning to check the progress. The next morning for Slovakian bike shops turns out to be 11 (when they open) so I cautiously planned to stay one more night with Tomas in case they couldn’t fix it. Somehow the guy had worked some cycling wizardry and the brake had been fixed. Not exactly good as new, but it felt solid.

Tomas came back from work and was keen to celebrate with fixing of the brake with Monday night round two. Brilliant. A personal highlight of the night, was ‘fixing’ Tomas’ garage electricity port. He decided that one of the cables was looking a bit dodgy, so now at 6am we were to remove it from the port to stop it getting any worse. A beautiful wave of sparks signalled a swift end to my electrical career and to top it off, all the power to the street went down. Vowing to never touch a cable ever again, I left Tomas, who seemed undeterred by the situation, break into the electrical box for the street, and like magic, everyone had their electricity back. It was like he had done this before…

Slightly sleep deprived, I thanked Tomas for his thorough introduction to eastern Europe and cycled straight out of Slovakia. Crossing into Hungary, everything got a bit greyer, a bit poorer, and it started snowing again. This and the next days cycling was to be a healthy dose of ‘grin and bear it’ cycling. Snow became blizzard, roads became ice. At points I had to push my bike two miles through an unrideable cocktail of soft snow and mud before finding anything rideable again. Determined not to be silly and rush, I just listened to podcast after podcast until they became some sort of unit of time. About two podcasts into the day I had my first wild dog encounter, thankfully this one didn’t cause me much hassle and yapped a bit before I lobbed a rock at its head and buggered off. I hadn’t been expecting one of this this early. Quickly I adopted the well know cyclists code of ‘you must carry at least three rocks on you at anytime to scare away the dogs’ and carried on.

Finally some sun in the Hungarian hills.

That night I couch surfed with three nice Hungarian lads, watching endless english cartoons with Hungarian subtitles, we had a good laugh that transcended all language barriers. This was only brought to an end when they seriously warned me that if I was to see any gypsies on my way to the supermarket, that I should turn around and come back immediately. I felt like I was getting the real eastern European experience here, even a trip to the local Spar to pick up a couple of buns had become exciting. Like a ninja, I swiftly sprung across shadowy streets carrying my precious cargo safely home without a gypsie in sight.

The next day was the beginning of the colder spell to hit Europe, temperatures forecast to drop to lows of -13’C didn’t sound too appetising. Thankful for my new pair of gloves, I put all three pairs on and briskly cycled up my first hill in ten days. The sun radiated off the snow covered hills, making everything look like a winter wonderland and warming me right up. They must’ve misjudged the start of the cold spell, as I was soon sweating profusely and needing to cool down. The temperature thankfully remained around freezing for that morning and I could focus my attention away from the cold and onto the serious task at hand. Crater dodging. These roads wouldn’t be out of place on the dark side of the moon. Giant tarmac crevasses seemed to constantly open up in front of my wheels, threatening to drop me and Tina into the very core of the Earth. Giant pieces of rubble lined the bike path, making for some crazed obstacle course. What would’ve been the most mundane of roads became exciting, and the hills, well… Managing to avoid the most serious of the craters, and after what was a pleasant mornings riding, I rolled over a very large Buda hill and down into Pest.

Eyeing up the final few hills until Budapest.